No items found
Shop now
Product is not available in this quantity.

How a Dying Man Impacted the Way I Live 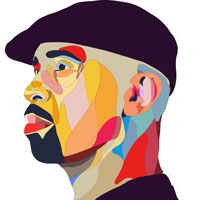 We tend to overlook the our opportunities until the point in which we notice the door shutting. Going to an event, hearing Ryan Hidenger speak served as a wake up call for my life and hopefully this story can serve you in the same manner.

Wheels up. Taking off from LGA (LaGuardia Airport) had always been surrounded with the raging feeling that anything is possible. NYC infects your spirit with both its pace and how it personifies ambition. It’s as if the city slips something in your drink that allows you to look at your existing life through a broader lens of possibility and yourself in an idealized way. This particular trip left a knowing that I would be returning as resident soon. Throughout the entire return flight to Atlanta, everything faded away into endless scenarios of being a NYC resident.

I walked around with a strut to my step for the next several days. While the relocation HOW had yet to reveal itself, I was certain that it would very soon. It was easy to envision a future within a rich creative community. The urge to jumpstart this process began with registering for an upcoming ATL Creative Mornings (A breakfast lecture series for the creative community www.creativemornings.com).

Wearing my freshly purchased ‘Brooklyn’ t-shirt, I made my way to the event. The subject of the talk was ‘Food’ by Ryan Hidinger. How was FOOD going to be inspiring? Little did I know what was in store…

Ryan, a tall, lean fellow with an interesting patch of white hair on his head took the stage. Within moments behind the podium, it was apparent that something greater than nerves were at play. A short video played informing the audience of his diagnosis of cancer. As his introduction continued, he visibly held back emotion as he described himself as a cancer survivor.

Throughout his presentation he navigated us through the career paths that led him to start his venture. The central theme that stood forward was his sense of community, partnered with food. It seemed like he had just began to hit his mark until cancer snuck in and foiled his plans. As he began to talk more about the illness, I was undercut by his continued tenacity to push through.

The lecture was held on June 28, 2013. He was given a six months prognosis to live almost six months previous to that day. Each second he spoke was on borrowed time. It was amazing to see how much of a meaningful contribution he still wanted to leave his community. The most powerful part of the conversation wasn’t what was said aloud, but the conversation that began to gain traction in my mind. The audience managed to get through the emotion rollercoaster of the talk. We laughed and cried. It was his inspiration that challenged each of us to find something within ourselves that we can pursue with as much passion without the high stakes. Creative Mornings had successfully stripped me of that aire which NYC gave me and challenged me to pair it with a sense of purpose. My mind was left with a growing list of questions.

What would you do if you had six months to live?

Why is he throwing himself into a project that he will never fully see come into fruition?

What am I doing with my life?

If I was going to move to NYC, I had to begin to become the person I knew it was going to take to thrive there. These self-reflective questions demanded me to take inventory of my life. The question of “What would you do if you had six months to live” seemed too cliché. I wanted to see it differently and extract a more meaningful perspective that I could begin to implement immediately.

WHAT WOULD YOU STOP DOING IF YOU HAD SIX MONTHS TO LIVE?

Through meditating, journaling and contemplating this question, revelations about myself were surfacing. As I reflected on the list it became clear: Why would it take facing death itself to inspire me to be more of my whole self? FEAR. Had I let fear of an uncertain future dictate my behavior? YES. The safe road that gave me a distorted sense of assurance also functioned to diminish my light.

The truth was deceivingly hidden in plain sight. I purport to be fearless and strong, but somehow a creative lecture had exposed a vulnerable portion of my armor. This process forced me to reconcile my overall outlook instead of moving to NYC and committing the same errors. Ryan had re-enforced within me a desire to participate in work that adds to my legacy. Any other activity was futile.

Fig 3 — The original chart from my Journal

Anything below the bar are things you should quit doing as soon as possible. Even high-skill and low passion activities need to be phased out. If you really resist that idea, I would challenge you to explore why you wouldn’t want to. If it’s something you want to continue I would suggest you find a way to activate your passion for it. Look for ways you can fall in love with it. Don’t talk yourself into keeping it around, but sincerely look for ways to rekindle that spark.

I’ve since moved to NYC. I’ve been a resident for six months and I can still notice how much that lecture has impacted my life. It’s not at the top of my mind lately but those journaling and contemplative sessions have rippled forward. I no longer do anything that fell below the line and I am actively striving to get all of those activities that I am passionate about into the top-right quadrant.

Ryan’s story was a metaphor for all of our lives. We are all living on borrowed time. As Dana Peppers said “No one escapes their lives alive.” Make it count. Faced with death I guarantee that fame, wealth, validation, and perception fizzle away and what we are left with is a desire to be remembered as someone of integrity who made an impact. We can’t get there doing things that don’t represent us.

There has never been a person in human history who has been recognized as a genius in a field they were disinterested in.

Ryan Hidinger lost his battle to cancer in January of 2014. He outlived his prognosis by 6 months and made an impact with the borrowed time he had. The day I heard Ryan speak set in motion a significant change in my life…thank you, Ryan.

The Value of History and Black History